On Thursday 26th April 2012, Kynaston Lodge, was privileged to have the Maid’s Head Lodge No.8558 Demonstration team from the Province of Norfolk attend its meeting.  The purpose of the visit was to present their latest production “William Preston – The Evolution of our Ritual”

The team arrived at midday to set up their equipment in the large temple and spent the rest of the afternoon rehearsing and arranging the lighting and settings.   After some refreshments, provided by the lodge, all was then set for the evening’s performance.

The play, which has been written and directed by WBro. Gary W Allen, dramatically follows the evolution of our ritual by the well known Freemason William Preston.  It was presented in seven scenes starting from a meeting of a few brethren in March 1763 to discuss the formation of a new lodge.  The production, in full period costume, lasted for over an hour and was very well received by all in attendance.  The WM, WBro. Alan Upex, thanked the team on behalf of Kynaston Lodge and guests and we retired to the festive board where it was apparent from the remarks made that every-one enjoyed the demonstration.

A cheque for around £400 was presented to WBro. Tom Hatchett, Secretary to the team, and which he then very kindly returned to the Lodge for the Cambridgeshire Province 2012 Festival.

A good night was had by all. 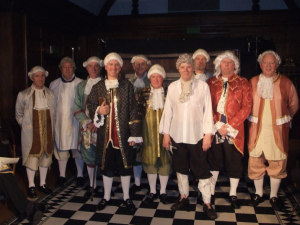 Members of the Maid’s Head Lodge No.8558 Demonstration Team

This site uses Akismet to reduce spam. Learn how your comment data is processed.